Le Silla shoes presents his autumn-winter 2012-2013, a line that once again returns to foreground shoes unique and precious jewel in the tradition of the brand, but among the most interesting of the winter collection sprouting also touches singular character. These groups are mainly pointed-toe cap and metal studs which apparently will be a real must-have winter, as we have also shown other collections. Let's find out the latest collection of Le Silla. 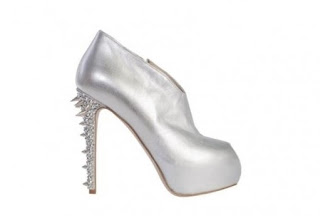 Le Silla is a brand known in the star system and between the shoe addicted especially for his creations covered with Swarovski crystals, models that season after season they continue to dream the fans of the genre. Even in its new winter collection Le Silla wanted to surprise entering the ranks of its models pumps and boots completely covered in glitter and crystals, all mixed effect of uppers in satin and suede in shades ranging from fuchsia, l ' orange, purple and classic colors.

Among the most beautiful that you can see better in our photogallery are ankle boots with high heels completely covered with crystals that create a very special stripes, ankle boots with internal platform alternating with dècolletès round toe and stiletto-heeled boots with plateau and external coating multicolor, supplemented by the effect of studs in relief.

15 and platform heels are very obvious external exploited for the peep-toe pumps, while the plateau become distinctive with their striped patterns and sculptural forms for dècolletès with high heels in leather, suede and patent leather.

Studs pointed in a sea of ​​crystals lining peep-toe ankle boots that remind us models targati Christian Louboutin, while the style of the brand becomes more aggressive with footwear dall'allure glam rock: we speak of round toe ankle boot with straps and chains along the ankle booties quilted leather with metal tip cap-toe, also studded, and dècolletès that resemble materials and tip in bright colors such as red.

Zip and metal inserts mark both the pumps as boots and sandals evening of the new collection, while crystals multicolor dècolletès return to a narrow point with fancy tiger in shades of gray and black.