Victoria Beckham takes to the catwalk during New York Fashion Week Manolo Blahnik shoes this year to complete the outfits designed for the next hot season spring summer 2013. The young designer, former Spice Girl singer in fact, continues to propose models for its collections of shoes signed by the major shoe designers in the world, will surely remember that in past seasons its runways were made even more glamorous by the presence of red soles badged Christian Louboutin! This time Victoria Beckham has the honor to show off to his models Manolo Blahnik shoes, give them a look! 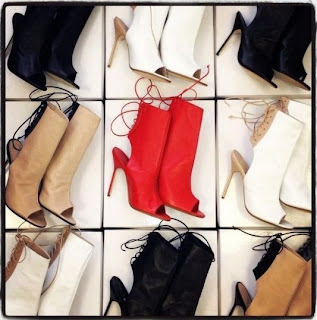 Both Victoria Beckham Manolo Blahnik have proudly announced on their twitter and facebook profiles their collaborations, allowing us also to give a sneak preview to the models that have walked the catwalk coated the Big Apple.

And once again, the Spanish shoe designer proves to be a great innovator, although never overdo it as often found doing his illustrious colleagues. For the Spring Summer 2013 collection of Victoria Beckham parade in fact models flat sandals in black leather open-toe with the lists that covers the heel and found the rest of the ankle wrapped in a black leather band ended strings, a revisitation original sandals slave!

Many of these models also have the distinction of a quarter with the highest coming below the knee, creating a distinctive fusion between the model of the sandal thongs and boots, available in this case in classic colors like black and beige with effect painted. Nevertheless, there are high heels, stilettos of 10 cm for the tip peep-toe sandals with uppers which dates from the ankle discovering the heel, completed models from strings in the back this time.

These parts are designed ankle boot in black, white, beige and two-tone versions that combine upper tones in the back in black with strings, but among the new features that are at the opposite extreme there are lace-ups and loafers for women decidedly masculine charm.

The models whose photos Manolo Blahnik has posted on twitter, are designed with square toe, leather upper, preferably in bicolor and side buckle adjustable metal complete the form, shoes for men definitely rethought by the stylist to the stars in an innovative version and really appealing. Take a look at the models in our photo gallery, what do you think?