Nicholas Kirkwood continues to create unique designs of shoes in collaboration with Erdem, as has already happened in the past. This time, in view of the autumn-winter season 2012-2013, the German designer chooses to bet on shoe passage perfect for the period, namely the ankle boot, but there are also models of pumps whose most obvious feature, except for the choice of materials and decoration color, is once again the presence of sculptured heels unique and truly unique. Let's take a look at the line in detail. 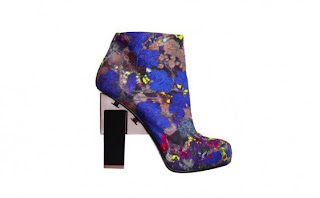 Several years ago, Nicholas Kirkwood enter the ranks of his new shoe models made through various collaborations, as with Peter Pilotto, the one with the Canadian designer Erdem, for which he has already made small masterpieces in the past seasons.

In this case, with the autumn around the corner with shoe designer has chosen as a model of what dell'ankle boot tip, proposed in the version with round toe and heel equipped with rectangular coated, connected to the rest of the upper by means of a particular structure plexiglass with protruding nails to finish the joints. This is not the first time that Nicholas Kirkwood is delighted with sculptured heels and fancy shapes, it did in the past with the models in the line that bears his name, with the latest Resort collection 2013 and also with collections of Pollini which is the creative director, so it is in his element!

The proposed models are designed for rough skin plays with paint effects and models in various colors, starting with the eggplant-colored with shades of magenta, and finally to the variations in tones typical of winter as dark blue. Among the most notable versions are ankle boots multicolor fabric characterized by geometric patterns in shades of pink, blue, black and yellow lemon, and a beautiful version of a watercolor painted in imitation, with "spots" of cobalt blue, magenta, yellow and beige.

Two models of pumps proposed in line Nicholas Kirkwood for Erdem. The first is designed with heel sculpture and coating with reptile print on a yellow and dark blue with black accents and internal platform to balance the dizzying height, the second recreates the floral prints dear to the designer, in this case also portrayed as a real its framework. Even small works of art for Nicholas Kirkwood, what do you think?