Jean Paul Gaultier goes down the runway with his fall winter 2012-2013 collection during Paris Fashion Week and as always, is entertainment! The eccentric French designer is once again a great innovator always keen to experiment with shapes and color effects to create models of shoes that definitely knows how to get noticed! Year after year the catwalk of Jean Paul Gaultier is one of those who expect to be able to comment already aware that the French designer manages to amaze us! And once again we were disappointed! 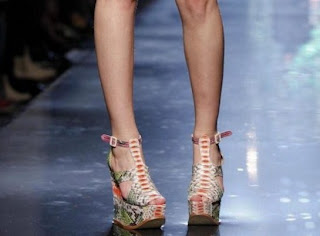 In these days of Parisian catwalks have seen many collections for next winter in which to dominate the scene were a sculptor shapes and high heels as in the case of Christian Dior, and again today the always unique and extraordinary Vivienne Westwood.

But Jean Paul Gaultier seems to always have an edge over each year, only a few months ago we commented his haute couture collection inspired by the singer Amy Winehouse, and even there the shoes were quite "remarkable"!

For his catwalk pret-a-porter designer chooses once again very striking forms, we start with a black leather ankle boots with high heels and continues with decolletes leather effect paint in different colors which include in some cases a t-bar more bon ton.

The return of the high heels and big trays of sandals even bright colors that include fuchsia, the models we have already seen the parade of haute couture, but there lace of high wedges and pumps with reptile print multicolor which incorporates the colors of outfits. An unparalleled collection of daring and want to impress!