Casadei is preparing for a winter season very interesting as it shows us the collection Pre-Fall 2012/2013 in its first images. Impact colors, striking contrasts, very eccentric forms that depart from the pumps and high heels come to the cuts of fur boots for long, short, a collection that certainly knows how not to go unnoticed. Besides, the idea we were already done commenting on the images of advertising campaign fall winter 2012/2013, we see the models in detail. 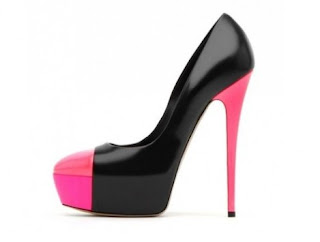 First, the pre-winter collection of shoes Casadei leaves plenty of room once again to high heels. Casadei has always had a special fondness for stilettos, suffice it to rethink models of the Blade which among many other celebrities have sported on the red carpet in years past.

Now in the wake of great innovators such as teachers and Christian Louboutin Giuseppe Zanotti, Casadei brings her stilettos far above the already dizzying 12 cm and offers us models of pumps really spectacular. The collection ranges between fact decolletes with reptile print peep-toe high heels 15 cm and outer plateau evident in vibrant tones of red, but in less conspicuous variations in the nude, and pink powder (at a price of 550 euros on luisaviaroma.com) models with round toe returning players after the domain of narrow peaks in the last period, and especially the variations in color blocks.

In this field he played on inspiration Casadei 70 proposing a round toe pumps with stiletto heel of 15 cm high, covered in pink paint then recovered by the tip and the front of the plateau (630 euros), a model that echoes that of stiletto ankle boot with a rigorous 15 cm in fluorescent yellow, complemented by black leather uppers and yellow tip over the plateau in fluorescent green (700 euros).

Even more unusual are the models of heeled boots covered in pink leather uppers and mood from animal covered with printed pony maculata (800 euros). Obviously one of the fancier models are placed in absolute boots, and not just those with high-heeled, the oversize or ankle boots with wedge heel high, because the models with basic black suede heels, clad in fluorescent tones and uppers covered with fur long, often in bright colors (1350 euros).

A collection that is discussed at length to Casadei, who once again proves that he has no fear of experimenting and daring. What do you think?