High Heels —— Topshop gets to make shoes with green soles. This new project by the young Chloe Jade Green, which offers not only the nuances in his name, but also in a new line of shoes that will be sold in outlets of the group of low-cost family fashion. There is, indeed, who makes shoes with red sole, even suing due to all those who dare to copy it, and who, instead, uses the color green, much more eco friendly fashions seen the turning of the international fashion. Here's the brand new project that will gorge addicted to shoes. 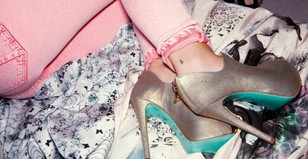 The sole is very important in a shoe.Or rather, its color it is, so that a designer like Christian Louboutin shoes has filed a lawsuit against famous Yves Saint Laurent just guilty of stealing the idea, proposing in his collection of shoes for sale in the United States of America the same nuance, that he had even patented.

I wonder if Chloe Jade Green has taken the same action for his new fashion project. And who knows if it is informed that there are in circulation already offering green shoes in their soles. The heir to the British fashion brand Topshop low cost, in fact, decided to build a personal collection of shoes, which will be sold in their store of the British Empire created by his father. At the age of 21, he decided to do something concrete for the family business. And we addicted shoes that we can not be happy about this news. Also because it is a low cost brand!

Chloe Jade Green is now one of Britain's most famous IT Girl: not surprisingly is invited to all the shows of London Fashion Week, while the celebrities are racing to pose with her. Now the young scion of Topshop will also invented a new shoe collection, made entirely from her. The line, which will go on sale across the network Topshop from next May 17, has a curious feature: all have the green soles. The red led right to Christian Louboutin, who knows if the greens will be a lucky charm for the young Chloe Jade Green!

After all she is a passionate designer of the famous shoes: and who is not a faithful follower of Christian Louboutin, surely one of the greatest designers of shoes? To pay homage to him he decided to design a new color for the soles, inspired by its red but not copying it, because that Christian Louboutin would not welcome a new invasion of the field in the war of the red soles.

We just have to wait until the middle of May, to see what has combined the young heir of Topshop: you say, will conquer us?
Posted by Alan at 03:09