Precursors to the high-heeled shoe


(Introduction: For a woman to wearing high heels are accustomed to things, but for high heels and you know how much it? Did you know that the first high heels from?)

Most of the lower class in ancient Egypt walked barefoot, but figures on murals dating from 3500 B.C. depict an early version of shoes worn mostly by the higher classes. These were leather pieces held together with lacing that was often arranged to look like the ankh symbol, which represents life. There are also some depictions of both upper-class males and females wearing heels, probably for ceremonial purposes. Egyptian butchers also wore heels, to help them walk above the blood of dead beasts. In ancient Greece and Rome, platform sandals called kothorni, later known as buskins in the Renaissance, were shoes with high wood or cork soles that were popular particularly among actors who would wear shoes of different heights to indicate varying social status or importance of characters. In ancient Rome, the sex trade was legal, and female prostitutes were readily identified by their high heels. 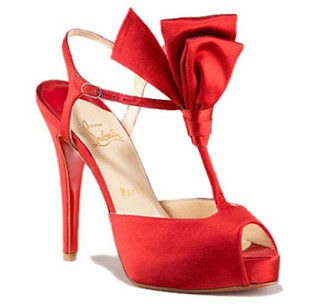 During the Middle Ages, both men and women would wear patten, or wooden soles, that were clearly a precursor to the high heel. Pattens would attach to fragile and expensive shoes to keep them out of the mud and other street debris when walking outdoors (Swann, 1984).

Elizabeth Semmehack, curator at the Bata Shoe Museum, traces the high heel to horse riders in the Near East who used high heels for functionality, because they helped hold the rider's foot in stirrups. She states that this footwear is depicted on a 9th-century ceramic bowl from Persia.

In the 15th century, chopines, a type of platform shoes, were created in Turkey and were popular throughout Europe until the mid-17th century. Chopines could be seven to eight or even 30 inches high, requiring women to use canes or servants to help them walk. Like pattens, chopines were overshoes, but unlike the pattens, chopines were worn almost exclusively by women. They were usually designed with cork or wood stacked as the heel.

The Venetians made the chopine into a status symbol revealing wealth and social standing for women, and tourists to Venice often remarked humorously on the outrageously high chopines. One visitor noted that they were "invented by husbands who hoped the cumbersome movement entailed would make illicit liaisons difficult" (McDowell, 1989). Already, we can see issues of domination and submission being associated with shoes much like the lotus shoes of China. Indeed, Chinese concubines and Turkish odalisques wore high shoes, prompting scholars to speculate if heels were used not only for aesthetic reasons but also to prevent women from escaping the harem (Kunzle, 2004).

Shoes were beginning to be made in two pieces during the 16th century, with a flexible upper attached to a heavier, stiffer sole (Swann, 1984). This new two-part shoe led to the heel as an actual part of the shoe rather than just an attachment.

It is sometimes suggested that raised heels were a response to the problem of the rider's foot slipping forward in stirrups while riding.The "rider's heel", approximately 1½ inches (4 cm) high, appeared around 1500. The leading edge was canted forward to help grip the stirrup, and the trailing edge was canted forward to prevent the elongated heel from catching on underbrush or rock while backing up, such as in on-foot combat. These features are evident today in riding boots, notably cowboy boots.

The simple riding heel gave way to a more stylized heel over its first three decades. Beginning with the French, heel heights among men crept up, often becoming higher and thinner, until they were no longer useful while riding but were relegated to "court-pony" wear. By the late 17th century, men's heels were commonly between three and four inches high.

In 1533, after men had already started wearing heels again, the diminutive Italian wife of Henry II, King of France, Queen Catherine de' Medici,commissioned a cobbler to fashion her a pair of heels, both for fashion and to suggest greater height. They were an adaptation of chopines and pattens (elevated wooden soles with both heel and toe raised, not unlike modern platform shoes or clogs and sabots), intended to protect the feet of the wearer from dirt and mud; but unlike chopines, the heel was higher than the toe, and the "platform" was made to bend in the middle with the foot. That raised shoes had already been worn as a fashion statement in Italy, at least, is suggested by sumptuary laws in Venice that banned the wearing of chopine-style platform shoes as early as the 1430s.

High-heeled shoes quickly caught on with the fashion-conscious men and women of the French court and spread to pockets of nobility in other countries. The term well-heeled became synonymous with opulent wealth.Both men and women continued wearing heels as a matter of noble fashion throughout the seventeenth and eighteenth centuries. When the French Revolution drew near, in the late 18th century, the practice of wearing heels fell into decline in France due to its associations with wealth and aristocracy. Throughout most of the 19th century, flat shoes and sandals were usual for both sexes, but the heel resurfaced in fashion during the late 19th century, almost exclusively among women.

The article reproduced from Wikipedia.