The fashion brand Fratelli Rossetti celebrates a great myth of international cinema. This year, in fact, the whole world remembers the past, a diva, an icon of beauty, style and charm of the most admired of all time, unfortunately, left us prematurely fifty years ago. We're talking about Marilyn Monroe, the famous blonde actress who has turned the heads of the boys around the world and caught the imagination of millions of women with his stratospheric look. How many other brands, Fratelli Rossetti has also decided to celebrate his legend, with a model of shoe designed specifically thinking of her! 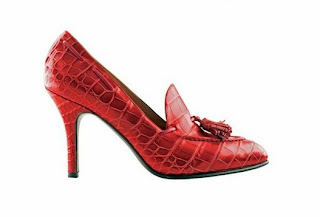 After having revived the iconic Moccasin Brera Fratelli Rossetti creates a new shoe that is a candidate to become a must have for the female wardrobe. A very elegant and chic shoes, inspired by the charm of a woman who died prematurely fifty years ago: the causes of his death still haunt many, too many mysteries, which, inevitably, have made it one of the most famous actresses of the world a true and own myth.

A myth that this year was also celebrated by the 2012 Cannes Film Festival, where we saw beautiful shoes but also their posters starring Marilyn Monroe, intent on blowing out candles on a cake to celebrate this important birthday, the festival reached film, which took place recently in the beautiful scenery of the Côte d'Azur.

Fratelli Rossetti also wanted to tell her, presenting a tribute to the great diva who could only be achieved through a lovely pair of shoes, made in limited edition to celebrate the myth of Marilyn Monroe: the shoe is a beautiful and elegant special version the legendary Lady decolletes Brera, however, made in a stylish red crocodile. The stiletto heel is obviously high, but not too exaggerated to an appeal that is timeless, like the blonde actress in "Some Like It Hot."

Fratelli Rossetti, also will attend the international exhibition curated by Alessandro Gedda: Tribute to Marilyn is a retrospective which consists of fifty works will see the actress. The works will be exhibited in the halls Umanitaria Milan until next July 10, 2012. The exhibition is touring the capital of Lombardy and after the celebration of art dedicated to the diva will arrive in Cannes, then moved to Lugano, and finally in Moscow.